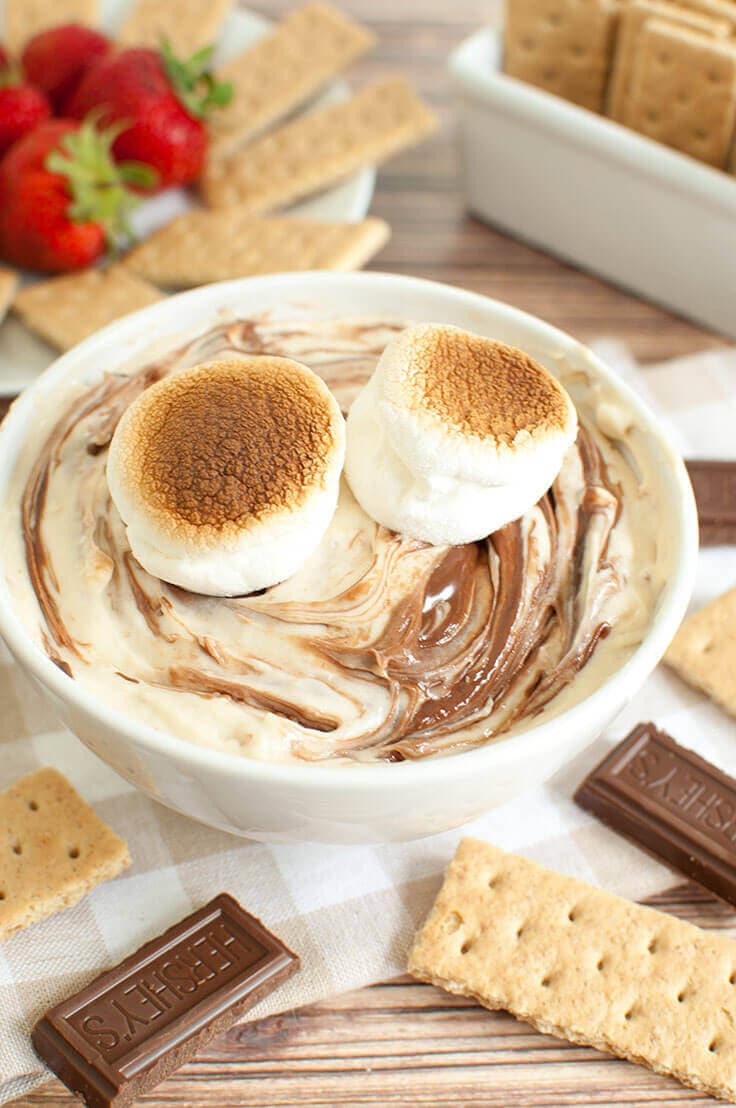 A fun spin on a S’mores Dip recipe! This sweet and creamy S’mores Dip is made with toasted marshmallows and melted Hershey’s chocolate bars. The sweetness of this dip makes it a great fruit dip, but it is also great with the more traditional graham crackers as dippers.

I took this dip to one of my girl’s nights recently and after dinner, I was requested to bring it from the kitchen to the table on the porch where we were all sitting….I take that as a good sign 🙂 The favorite dipper seemed to be the strawberries although the graham crackers were a hit too. 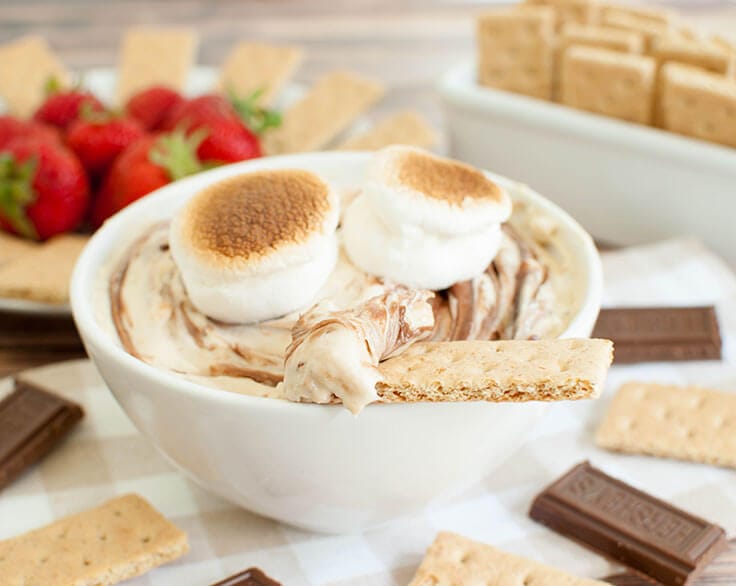 There are many variations of S’mores dip out there. I even have this S’mores Cheescake Dip on the blog which this particular recipe builds off of. What I like about this one though, is that you incorporate the toasted marshmallows into the dip itself. Yep, toast them and then mix them right into the cream cheese mixture!

This makes it nice if you need to transport the dip somewhere and don’t want to worry about having to stick it in the oven to toast the marshmallows at the last minute. Have you ever been standing in front of a stove with a group of people waiting in the wings to eat whatever it is you’re cooking? Sometimes it’s nice to get that part out of the way before hand. You can still toast some marshmallows right before serving to top the dip with if you would like for extra marshmallow flavor (or because it just looks cool). It will also hold up a little better sitting out at a party 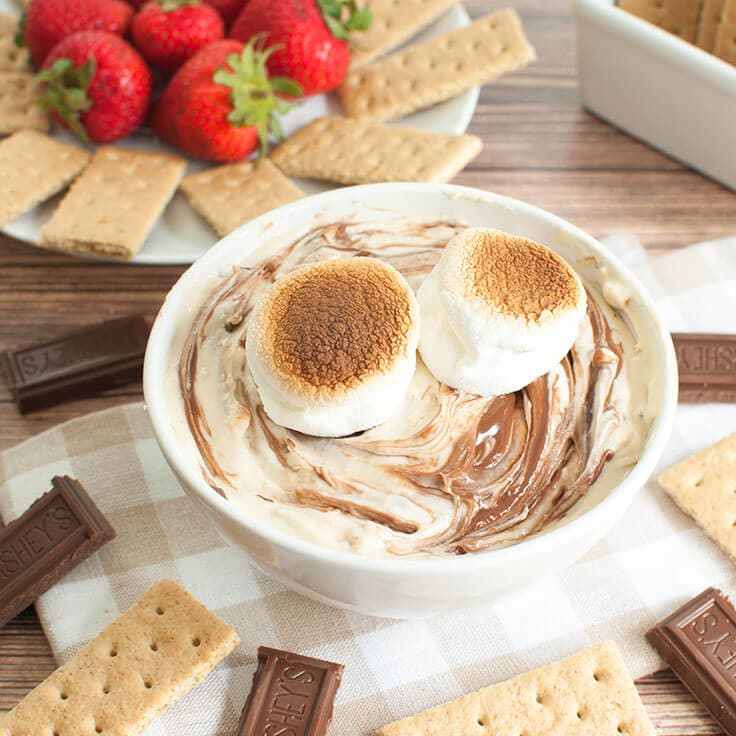 To toast the mini marshmallows for the dip, line a baking sheet with aluminium foil and spray with non-stick cook spray or grease with butter. This is an important step, otherwise, you’ll end up with a gooey mess. The marshmallows will scrape off easily so you can just toss them in the bowl and mix. There will still be small chunks of marshmallow in the dip, but that’s OK!

S’mores and summer seem to go hand and hand, but S’mores are always in season if you ask me. 🙂 So enjoy the summer weather, grab a dipper (or a spoon) and dig into a bowl of this creamy S’mores Dip. 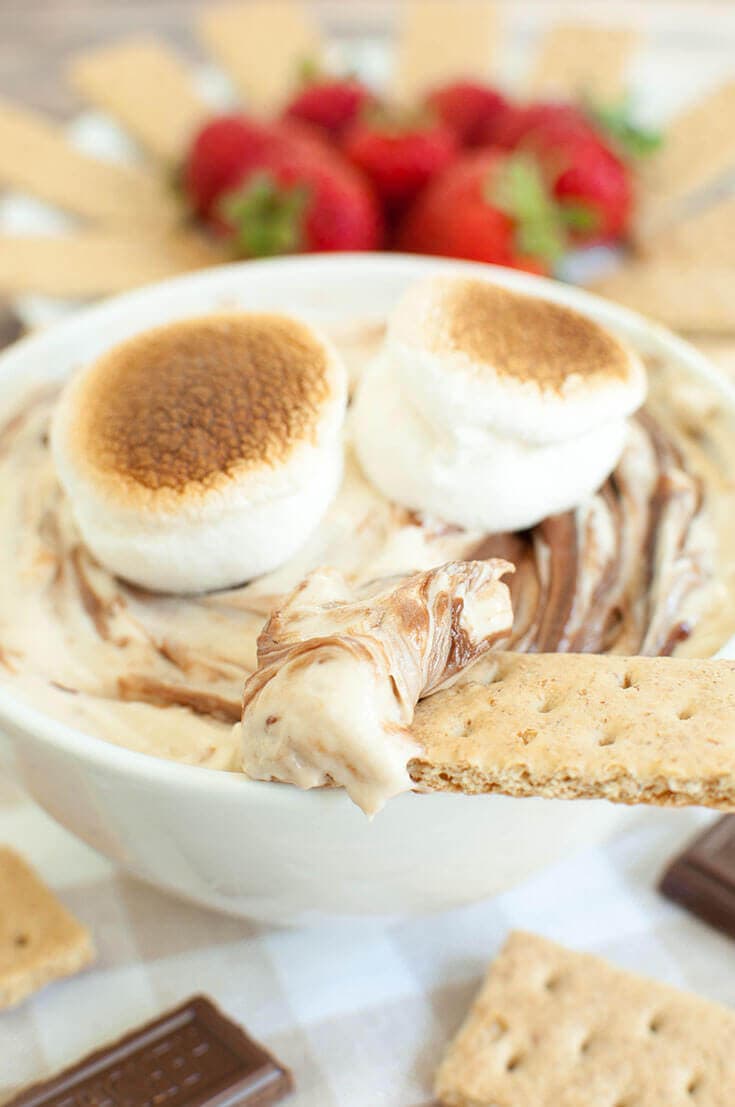 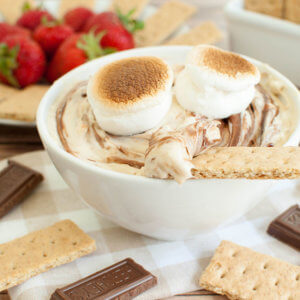